In 1987, the Florida Department of Transportation (FDOT) began the development of a Master Plan (Phase I) for the Tampa interstate system. The purpose of Phase I of the Tampa Interstate Study (TIS) was to identify needed and justified improvements to approximately 58.9 km (36.6 mi.) of I-275, I-75, and I-4 to safely accommodate anticipated travel demand in the year 2010. The overall objective of the Master Plan was to identify alternatives and make recommendations regarding the preferred type and location of multi-lane improvements, potential high-occupancy vehicle (HOV) facilities, transit facilities, traffic management techniques, and traffic surveillance and control systems. The results of the TIS Phase I are documented in the TIS Master Plan Report (August 1989), published separately.

The project study limits include approximately 24.1 km (15 mi.) of I-275 and I-4 and begin at Memorial Highway (S.R. 60) from I-275 to just north of Cypress Street and I-275 from the Howard Frankland Bridge/Kennedy Boulevard ramps north to Dr. Martin Luther King, Jr. Boulevard, I-4 from I-275 (including interchange) to east of 50th Street (U.S. 41), the proposed Selmon Connector from I-4 southward to the existing Selmon Expressway, and improvements to approximately 7.08 km (4.4 mi.) of the Selmon Expressway from the Kennedy Boulevard overpass east to Maydell Drive.

The majority of the Tampa interstate system was designed and constructed in the late 1950’s and early 1960’s. Realizing the need to upgrade the antiquated interstate, the potential benefits of High Occupancy Vehicle (HOV) improvements, and to qualify the urban interstate system in Hillsborough County for federal interstate funds, a preliminary study was conducted by the Department in 1983. This preliminary study established year 2010 traffic for the interstate system and described potential short-term safety and geometric solutions for the existing interstate. Additionally, the study identified long-term, HOV-related improvements to accommodate year 2010 traffic volumes.

The Tampa interstate system was constructed in the early 1960s and is the spine of the Tampa Bay Region’s surface transportation system. Improvements to the system have been a priority to FDOT since the mid‐1980s. At that time, FDOT began to identify potential system improvements that would accommodate growing traffic volumes and congestion. The improvements that FDOT evaluated included short‐term safety solutions and design changes, as well as long‐term high‐occupancy vehicle (HOV) related improvements. The proposed improvements of the interstate system have been included in the Hillsborough Metropolitan Planning Organization’s (MPO’s) Long‐Range Transportation Plan (LRTP) since 1989.

An overall timeline beginning with the TIS and related milestones is shown below. 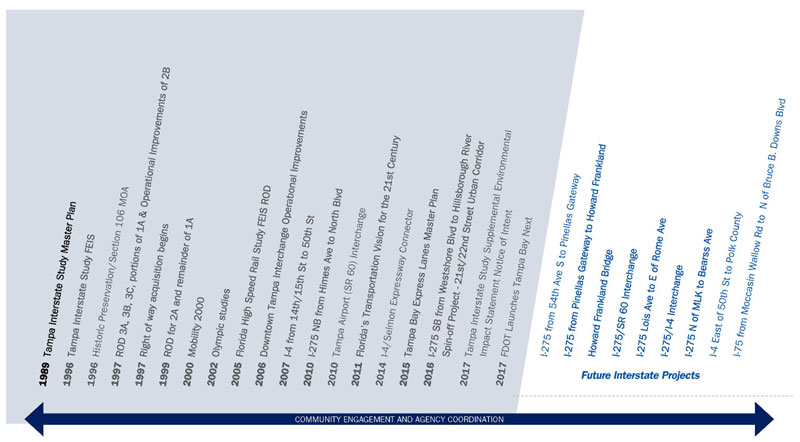 The Florida Department of Transportation (FDOT) is working with the Federal Highway Administration (FHWA) to re-evaluate improvements to the Westshore Area Interchange (I-275/SR 60) and the Downtown Tampa Interchange (I-275/I-4) as well as the I-275 corridor that connects them. The interchanges were originally designed in the 1960s and while partial improvements have been done throughout the years, the interchanges do not meet modern standards and cannot accommodate current or future demand. This process is called a Supplemental Environmental Impact Statement, because it supplements, or updates, the original TIS.

The purpose of the SEIS is to identify how to best upgrade the safety and efficiency of the existing I-275 and I-4 corridors that service the Tampa Bay region, while maintaining access to the community. The SEIS also looks to identify how to best provide congestion relief that improves accessibility, mobility, travel times, system linkages and multimodal connections, while supporting regional economic development goals and enhancing the quality of life for residents and visitors.

In addition to the original 1996 Long-Term Preferred Alternative (Non-Tolled), FDOT evaluated Tolled Express Lanes and the No Further Action Alternative.

Through the SEIS process, FDOT has identified the Locally Preferred Alternative (LPA) that will be submitted to FHWA for approval. The LPA includes the full reconstruction of the Westshore Area Interchange, including the addition of tolled express lanes, additional capacity via tolled express lanes along the I-275 corridor connecting the Howard Frankland Bridge and Westshore area to Downtown Tampa, and improvements to the Downtown Tampa Interchange (I-275/I-4) to enhance safety and improve traffic operations.

On November 14, 1991, the FDOT adopted an “Interstate Highway System Policy” which established the maximum number of through lanes for the interstate system within Florida. After extensive coordination with the FHWA and the FDOT’s Central Office, it has been determined that the Long-Term Preferred Alternative is consistent with the intent of the Policy.

The Long-Term Preferred Alternative includes a multitude of improvements such as major interchange connections serving the mainline freeway, a local access freeway, and frontage roadways.

The Florida Department of Transportation held a public hearing regarding the Tampa Interstate Study (TIS) Supplemental Environmental Impact Statement (SEIS), which includes I-275 (SR 93) from the Howard Frankland Bridge to north of Dr. Martin Luther King Jr. Boulevard (SR 574) and I-4 (SR 400) from I-275 (SR 93) to east of 50th Street (US 41) in Hillsborough County, Florida.